National Geographic Shares With Us The Truth About Our Planet... And That Truth Is Terrifying

Did you realize that there are over 9 milion tonnes of plastic waste created each year, all over the world? Even though more and more organisations try to reduce that number, our environment and especially wildlife still suffers immensely. National Geographic decided to create an informative and brutally honest campaign to raise awareness about the issue. It's called "Planet or Plastic?", and we all should spend a moment to learn something from it. 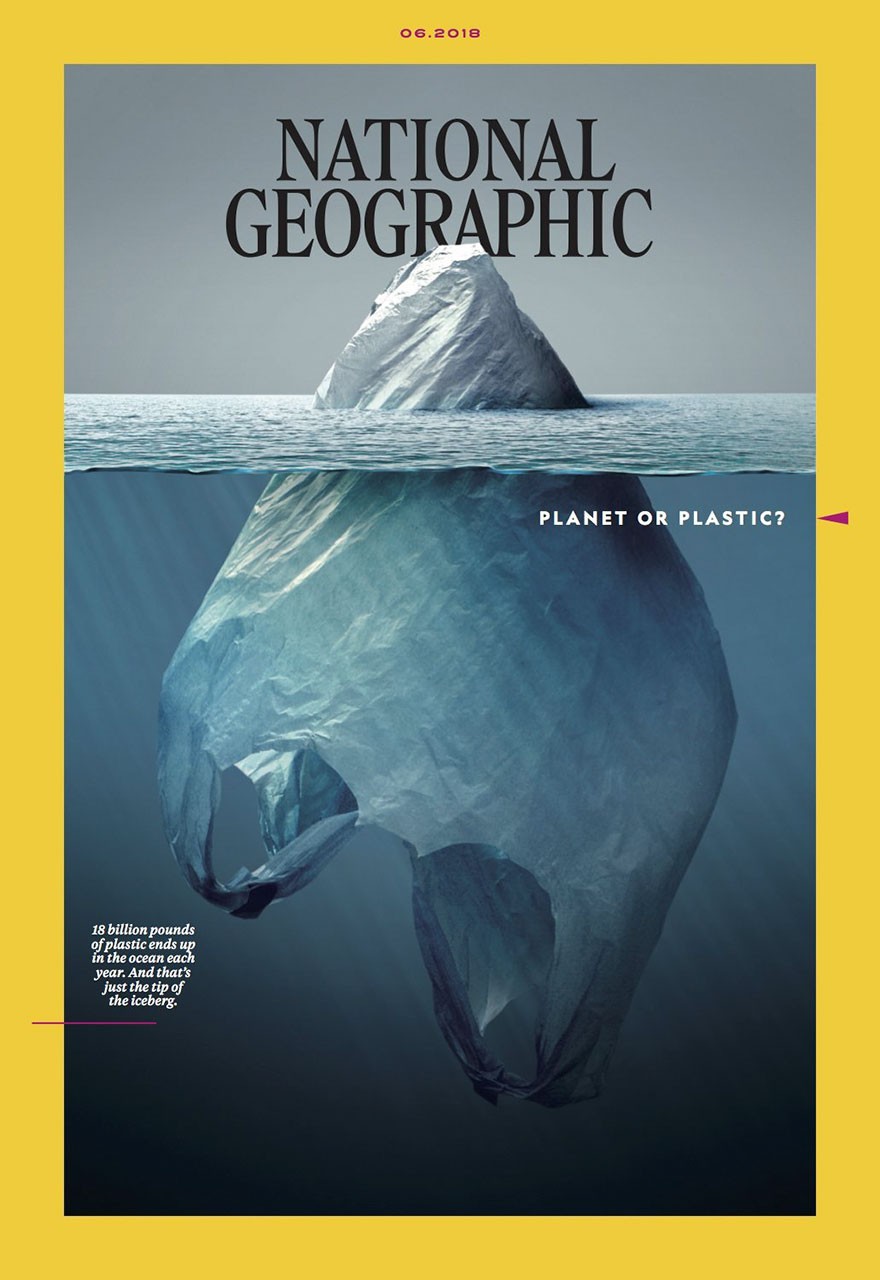 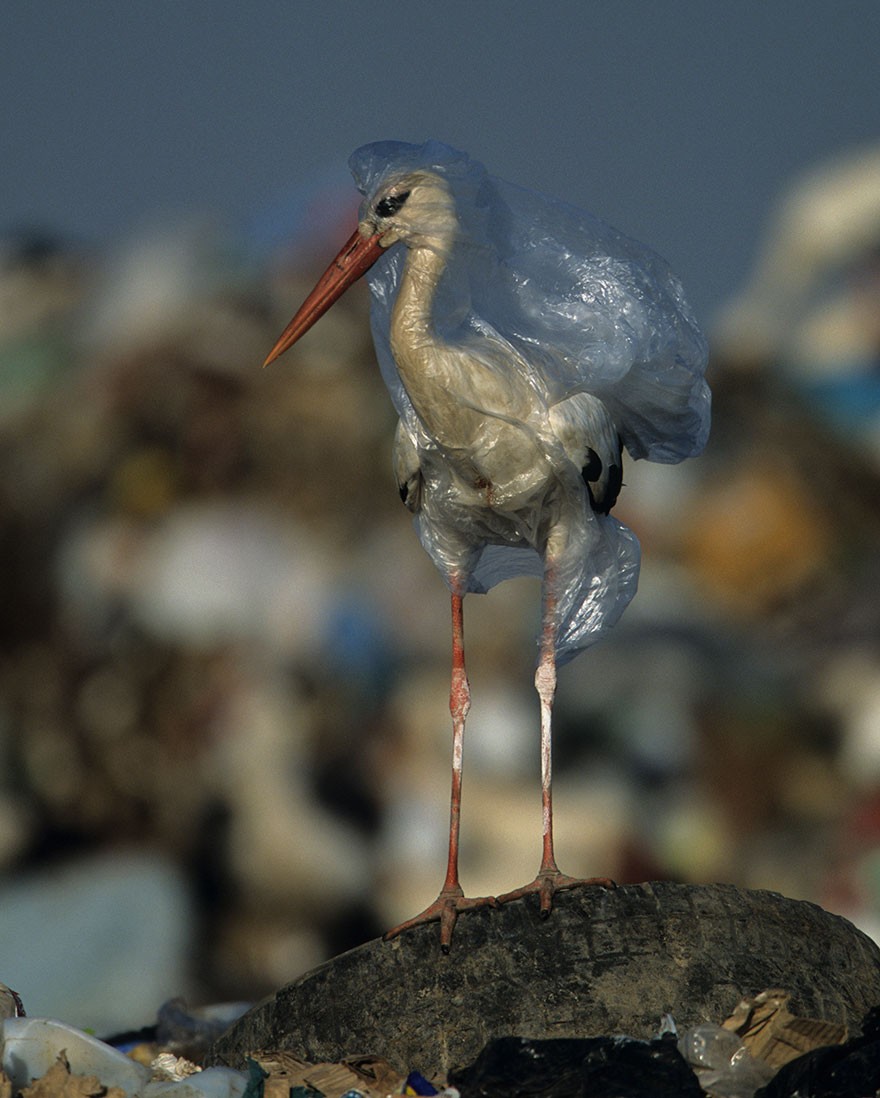 “The photographer freed this stork from a plastic bag at a landfill in Spain. One bag can kill more than once: Carcasses decay, but plastic lasts and can choke or trap again”

We all feel a little guilty when throwing plastic straight into the trash, knowing that we are contributing to a problem that is too vast for us to truly comprehend 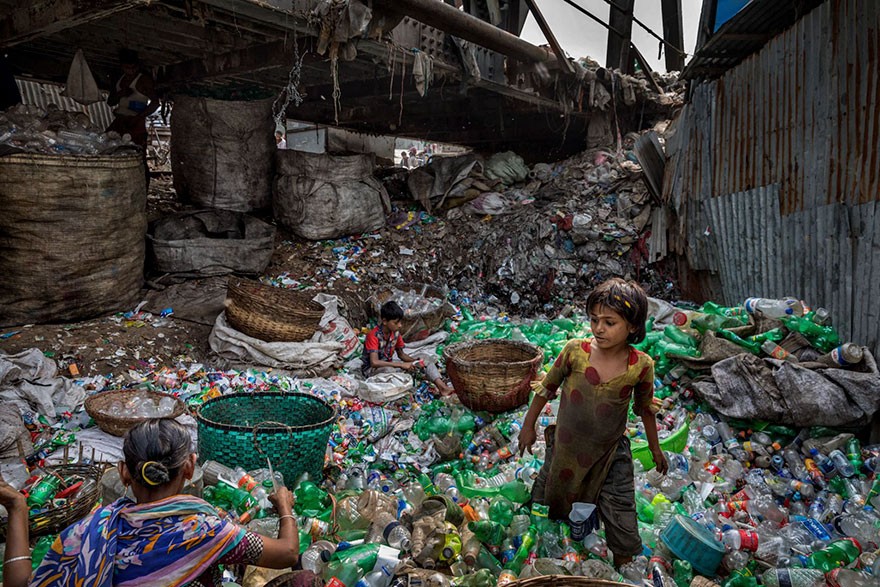 “Under a bridge on a branch of the Buriganga River in Bangladesh, a family removes labels from plastic bottles, sorting green from clear ones to sell to a scrap dealer. Waste pickers here average around $100 a month”

But what if we were faced with the horrifying consequences of our plastic addiction? 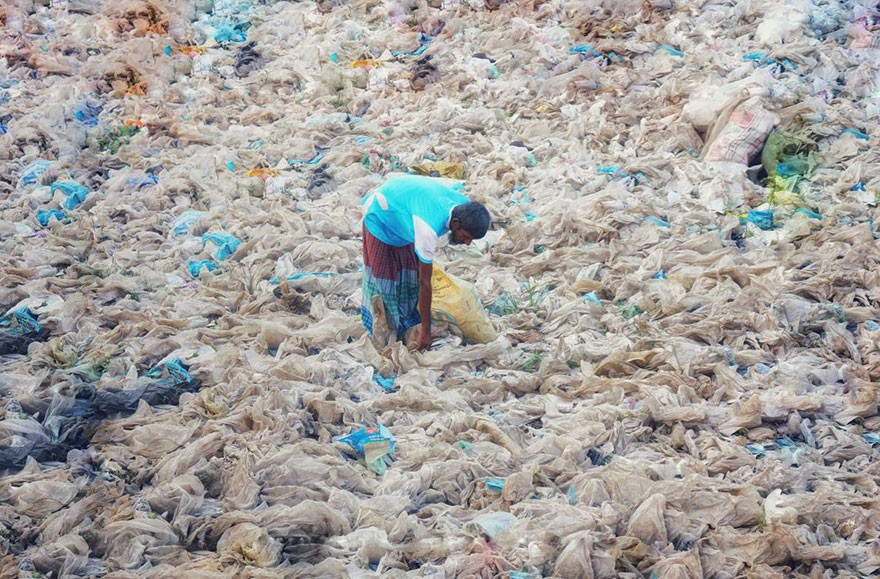 “The largest market for plastics today is packaging materials. That trash now accounts for nearly half of all plastic waste generated globally—most of it never gets recycled or incinerated” 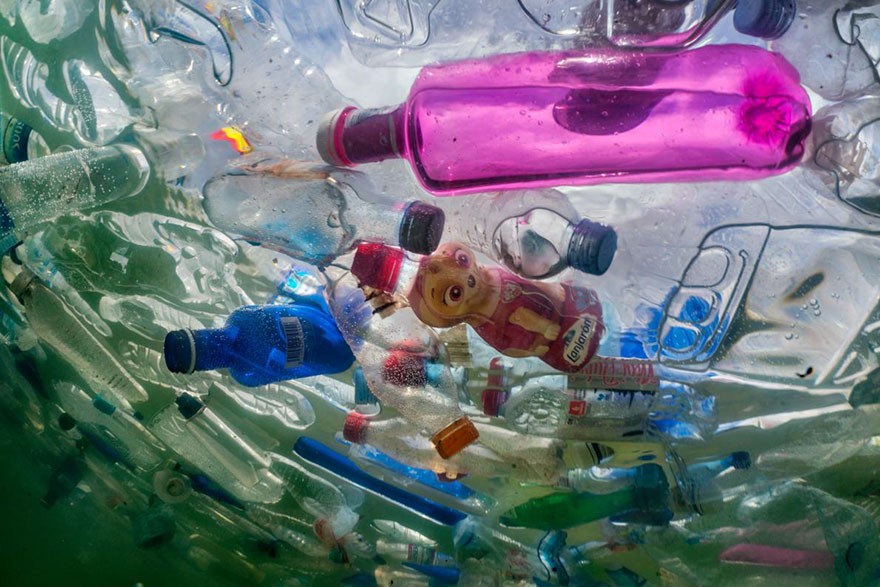 “Plastic bottles choke the Cibeles fountain, outside city hall in central Madrid. An art collective called Luzinterruptus filled this and two other Madrid fountains with 60,000 discarded bottles last fall as a way of calling attention to the environmental impact of disposable plastics” 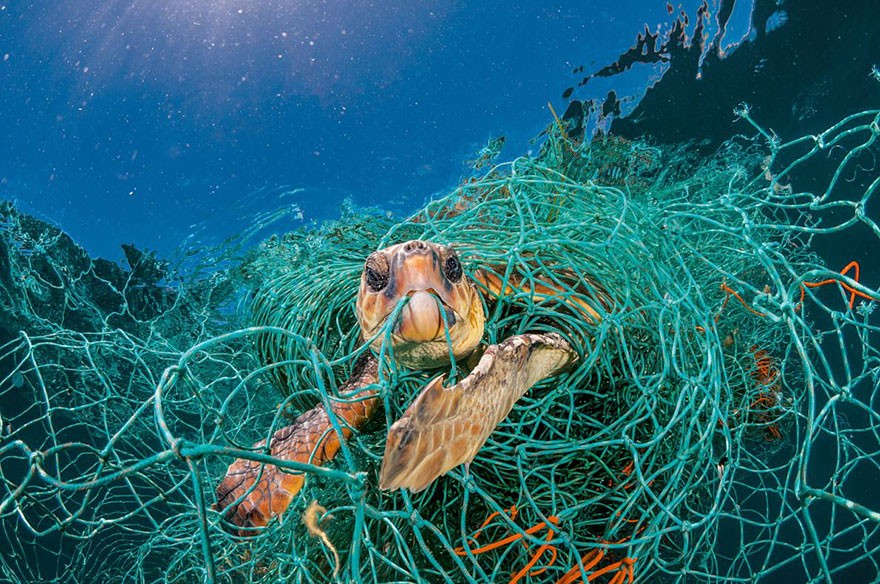 “An old plastic fishing net snares a loggerhead turtle in the Mediterranean off Spain. The turtle could stretch its neck above water to breathe but would have died had the photographer not freed it. “Ghost fishing” by derelict gear is a big threat to sea turtles”

Because every change, no matter how futile it may seem, helps at some level 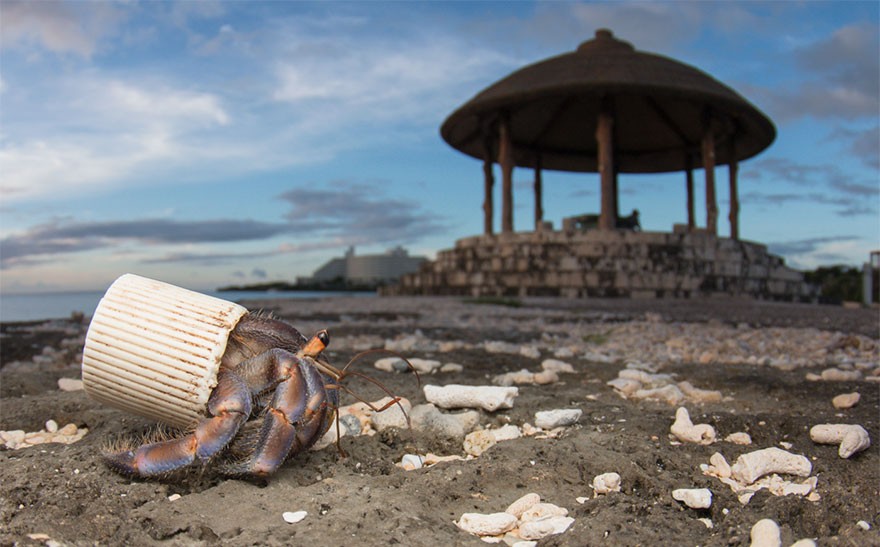 “On Okinawa, Japan, a hermit crab resorts to a plastic bottle cap to protect its soft abdomen. Beachgoers collect the shells the crabs normally use, and they leave trash behind”

The magazine itself is leading by example, beginning to send out their editions in paper instead of plastic 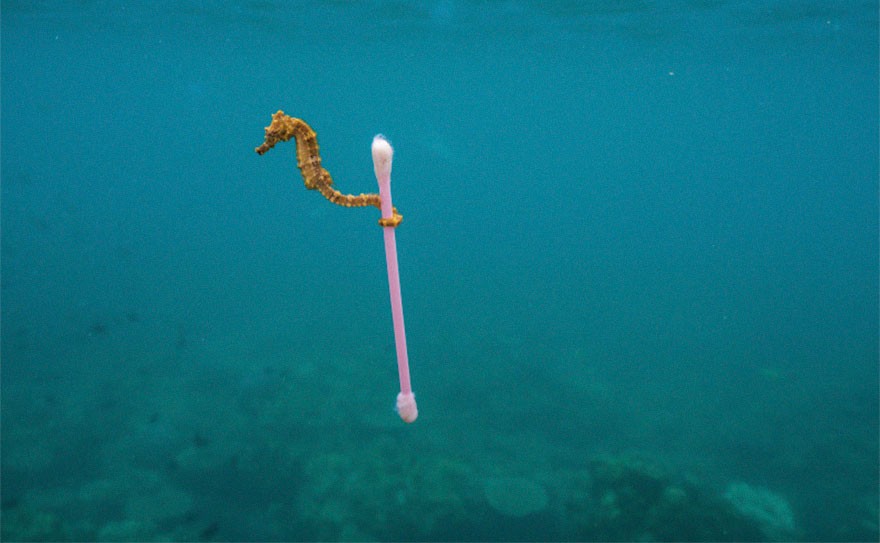 “To ride currents, seahorses clutch drifting seagrass or other natural debris. In the polluted waters off the Indonesian island of Sumbawa, this seahorse latched onto a plastic cotton swab—“a photo I wish didn’t exist,” says photographer Justin Hofman”

The campaign has identified plastic bags, bottles and straws as problematic products 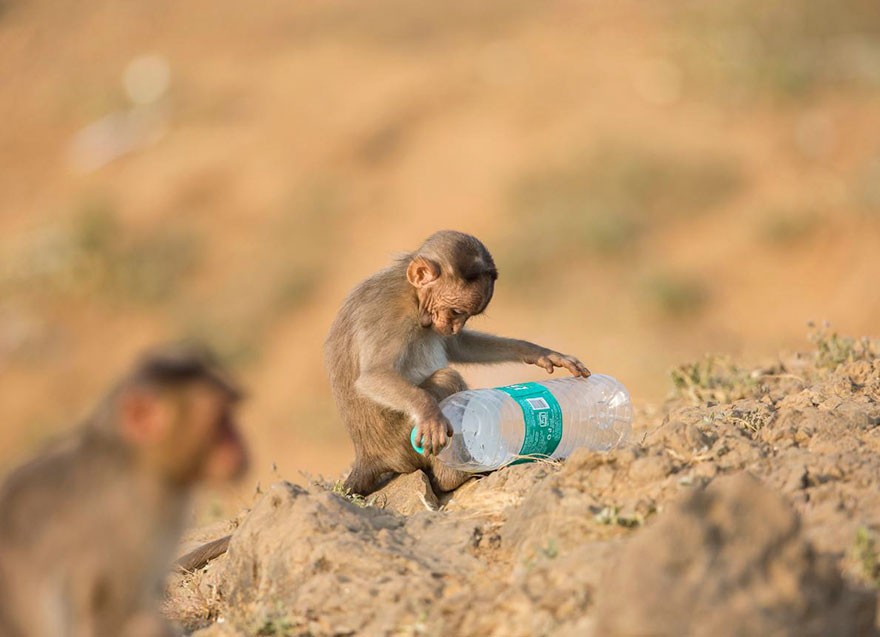 “Around the world, nearly a million plastic beverage bottles are sold every minute” 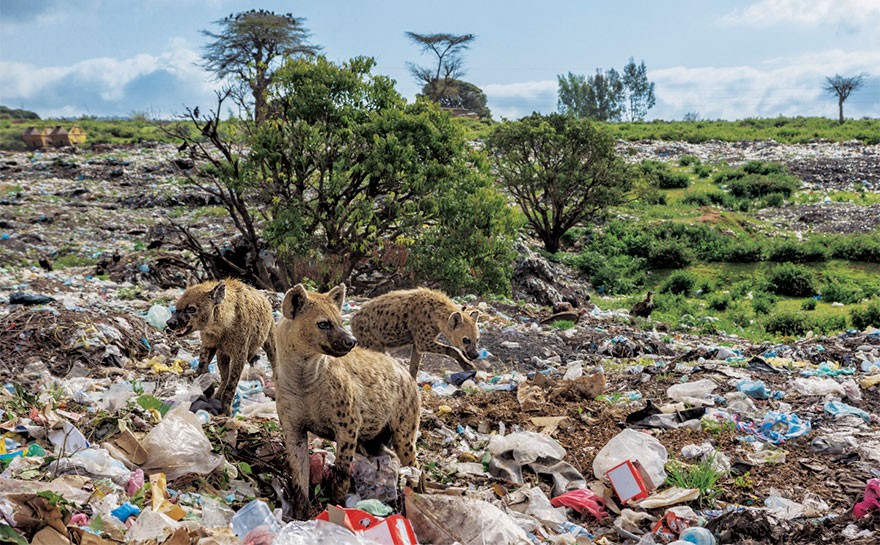 “Some animals now live in a world of plastics—like these hyenas scavenging at a landfill in Harar, Ethiopia. They listen for garbage trucks and find much of their food in trash”

Will you take the pledge? 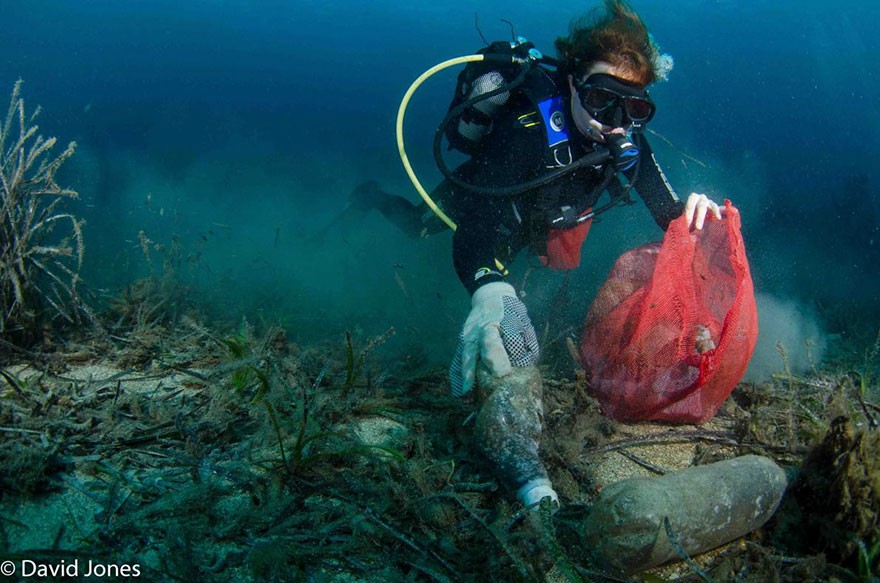 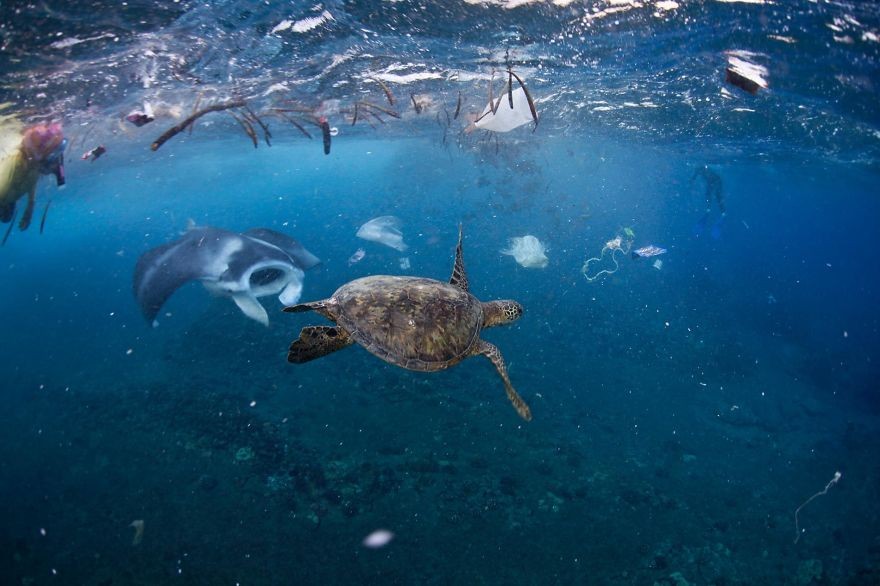 “For 130 years, National Geographic has documented the stories of our planet, providing audiences around the world with a window into the earth’s breathtaking beauty as well as to the threats it faces”

“By 2050, virtually every seabird species on the planet will be eating plastic” 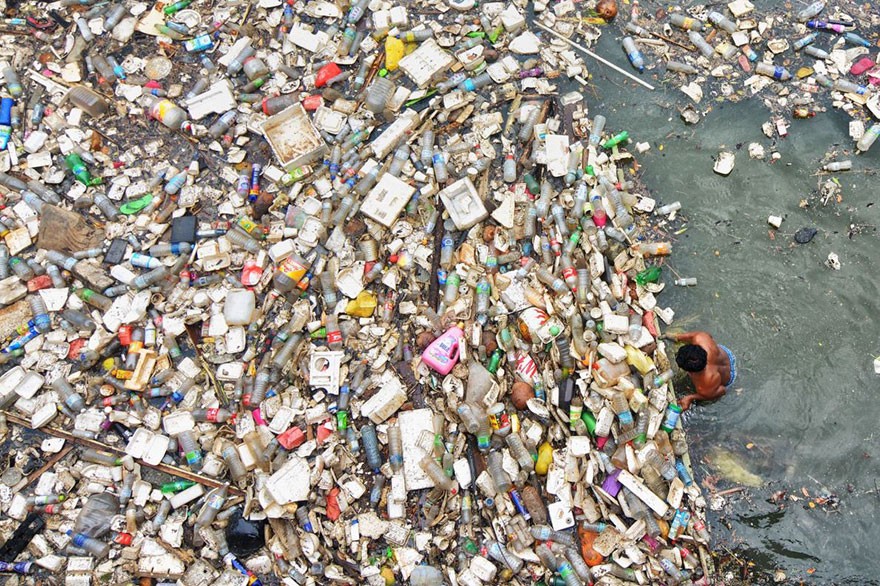 “As of 2015, more than 6.9 billion tons of plastic waste had been generated. Around 9 percent of that was recycled, 12 percent was incinerated, and 79 percent accumulated in landfills or environment”

“Each and every day, our explorers, researchers and photographers in the field witness firsthand the devastating impact of single-use plastic on our oceans, and the situation is becoming increasingly dire” 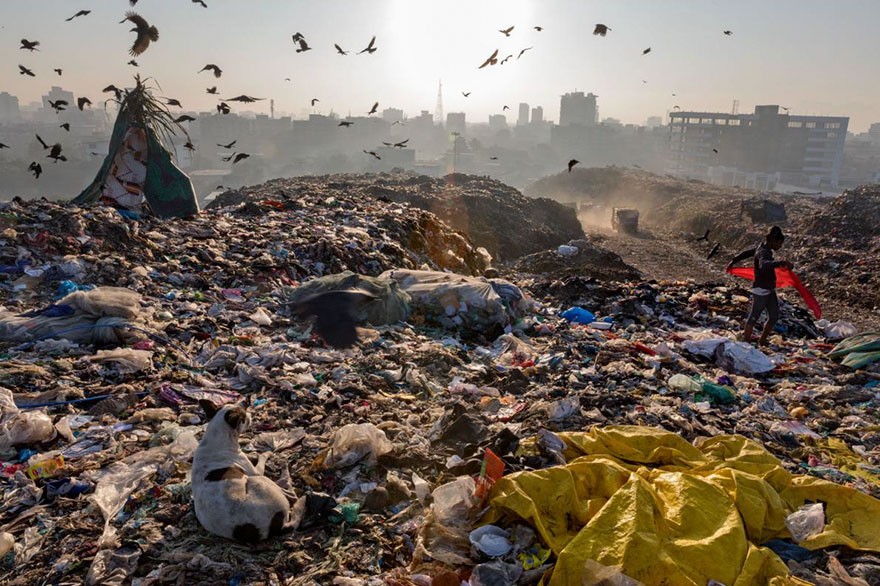 “Just after dawn in Kalyan, on the outskirts of Mumbai, India, trash pickers looking for plastics begin their daily rounds at the dump, joined by a flock of birds. In the distance, garbage trucks rolling in from the megacity traverse a garbage valley. The woman carrying the red cloth lives at the landfill” 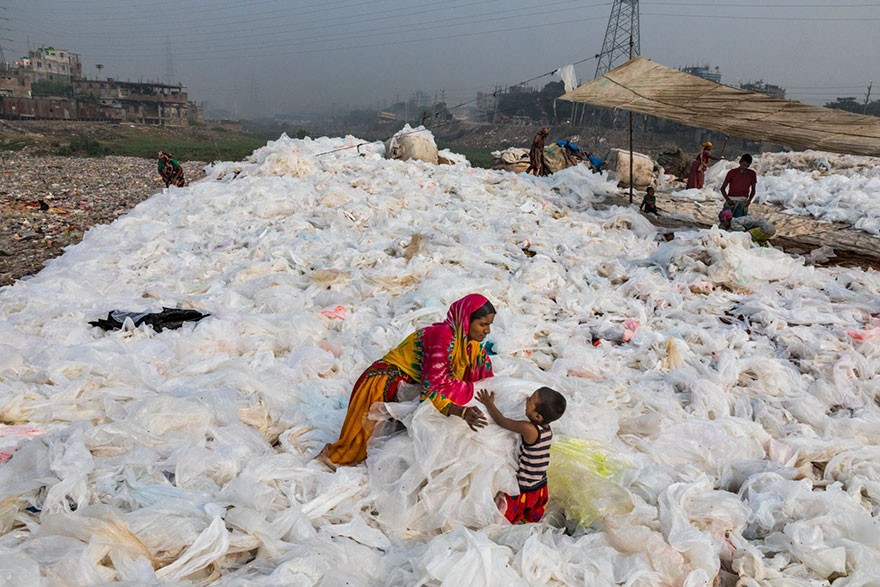 “After sheets of clear plastic trash have been washed in the Buriganga River, in Dhaka, Bangladesh, Noorjahan spreads them out to dry, turning them regularly— while also tending to her son, Momo. The plastic will eventually be sold to a recycler. Less than a fifth of all plastic gets recycled globally” 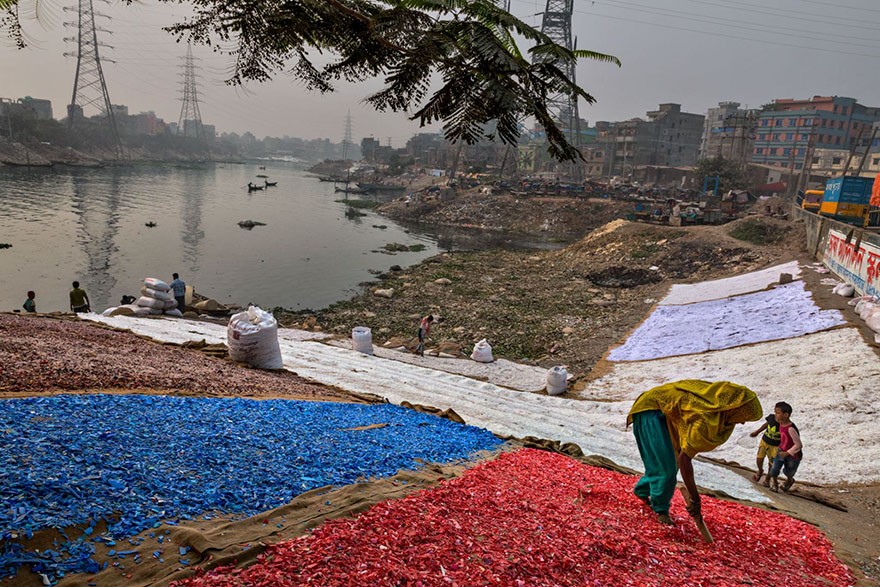 “Colored chips of plastic—collected, washed, and sorted by hand—dry on the banks of the Buriganga. About 120,000 people work in the informal recycling industry in and around Dhaka, where 18 million inhabitants generate some 11,000 tons of waste a day” 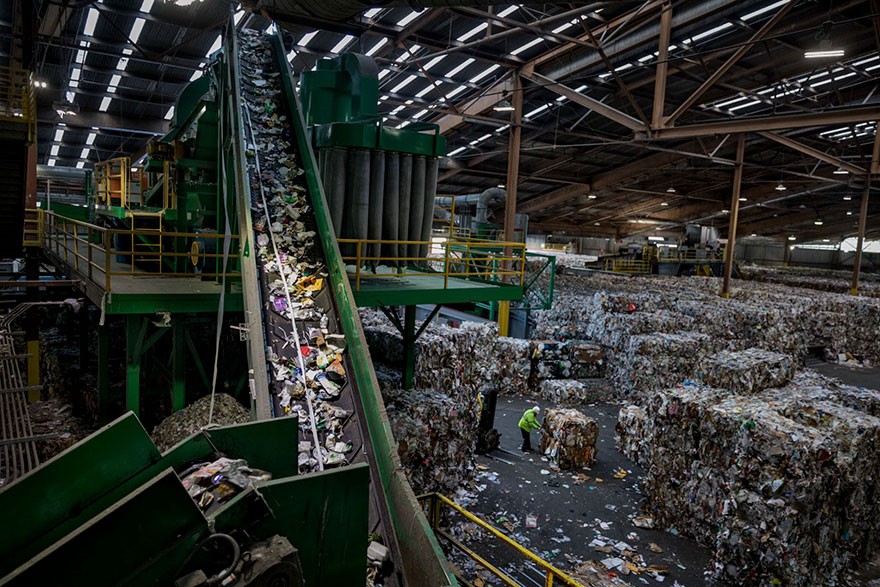 “Recology’s largest San Francisco recycling plant handles 500 to 600 tons daily. One of the few plants in the U.S. that accept shopping bags, it has more than doubled the tonnage it recycles in the past 20 years”

“Through the Planet or Plastic? initiative, we will share the stories of this growing crisis, work to address it through the latest science and research, and educate audiences around the world about how to eliminate single-use plastics and prevent them from making their way into our oceans” 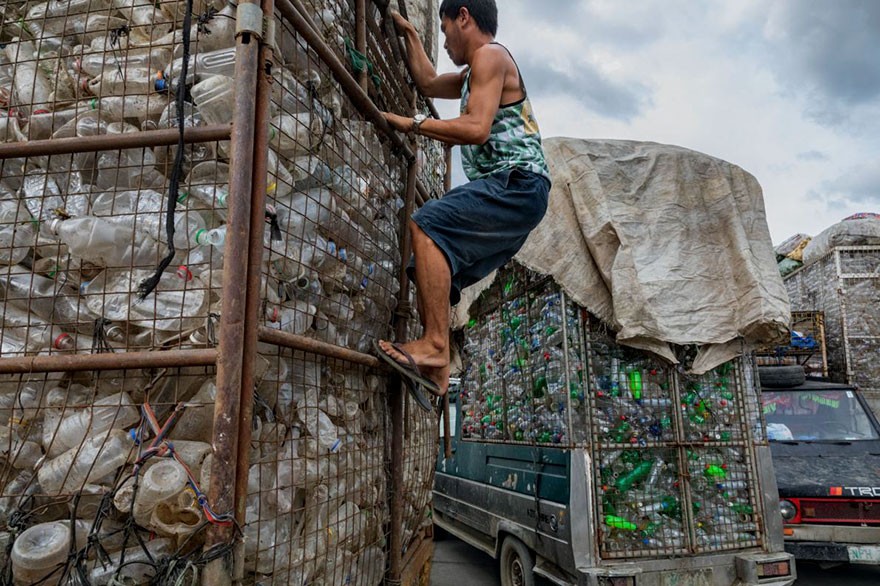 “Trucks full of plastic bottles pull into a recycling facility in Valenzuela, Philippines. The bottles were plucked from the streets of metropolitan Manila by waste pickers, who sell them to scrap dealers, who bring them here. The plastic bottles and caps will be shredded, sold up the recycling chain, and exported” 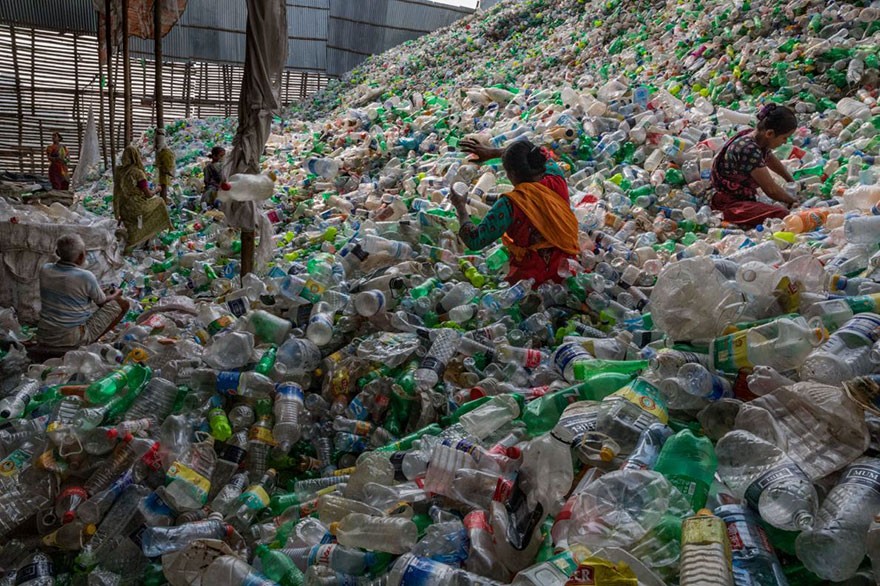 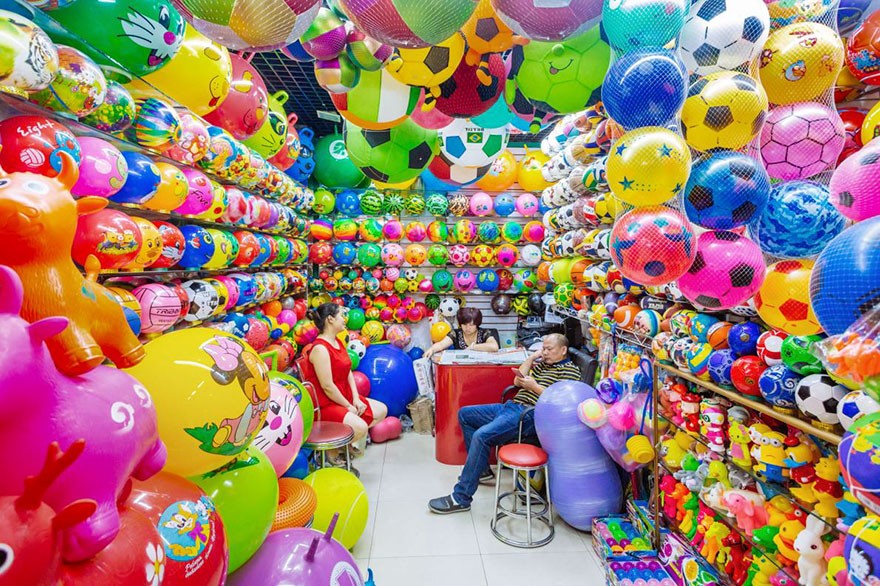 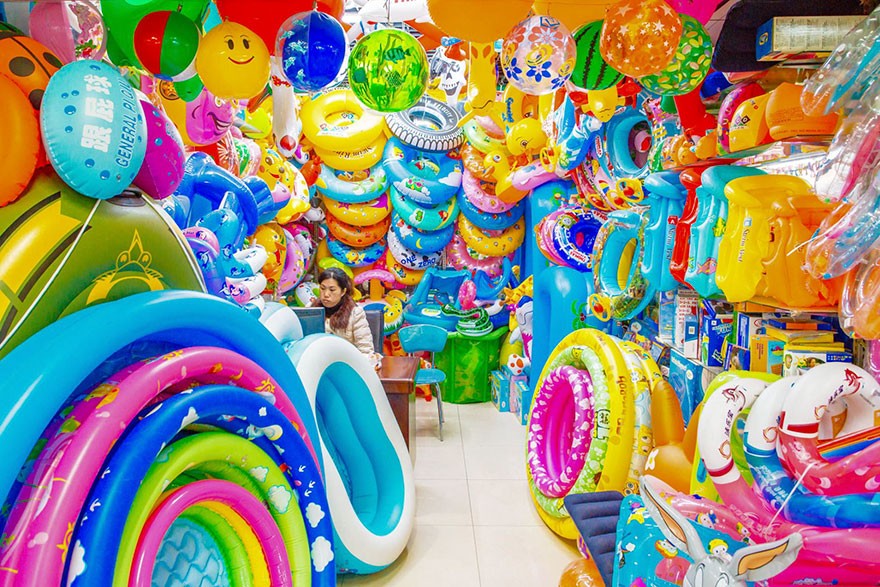 This chart illustrates the growth of plastic use throughout the years 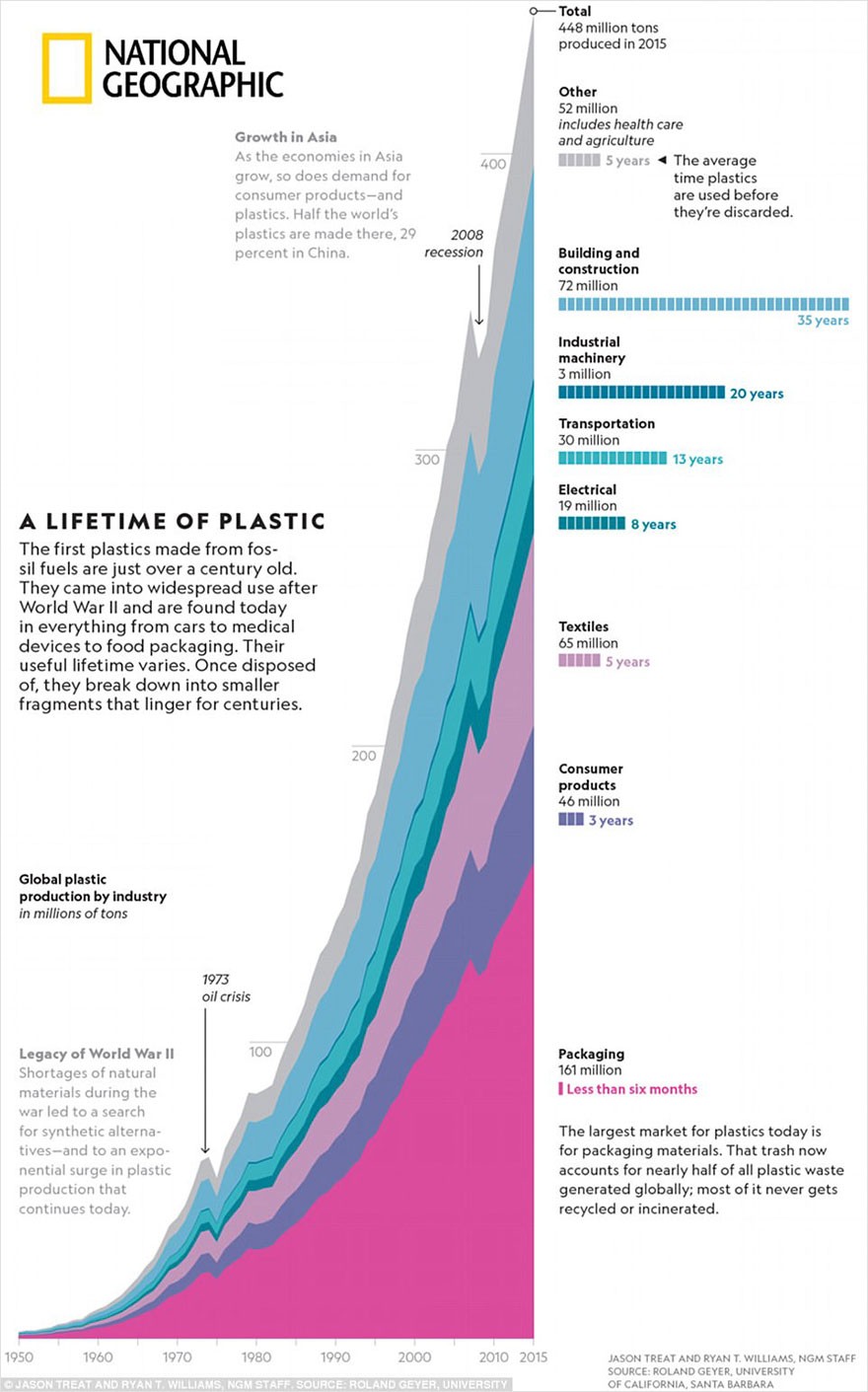