Asiula
Admin
posted on 4 years ago
—
updated on 4 years ago
4,787
views
Lists
Even though the chance you'll actually find yourself in such scenario are pretty slim, it's always good to know what to do in case you have to survive in the wild, without phone or internet connection. Thanks to these tips, you'll be ready for anything.

1. How to set a bonfire correctly 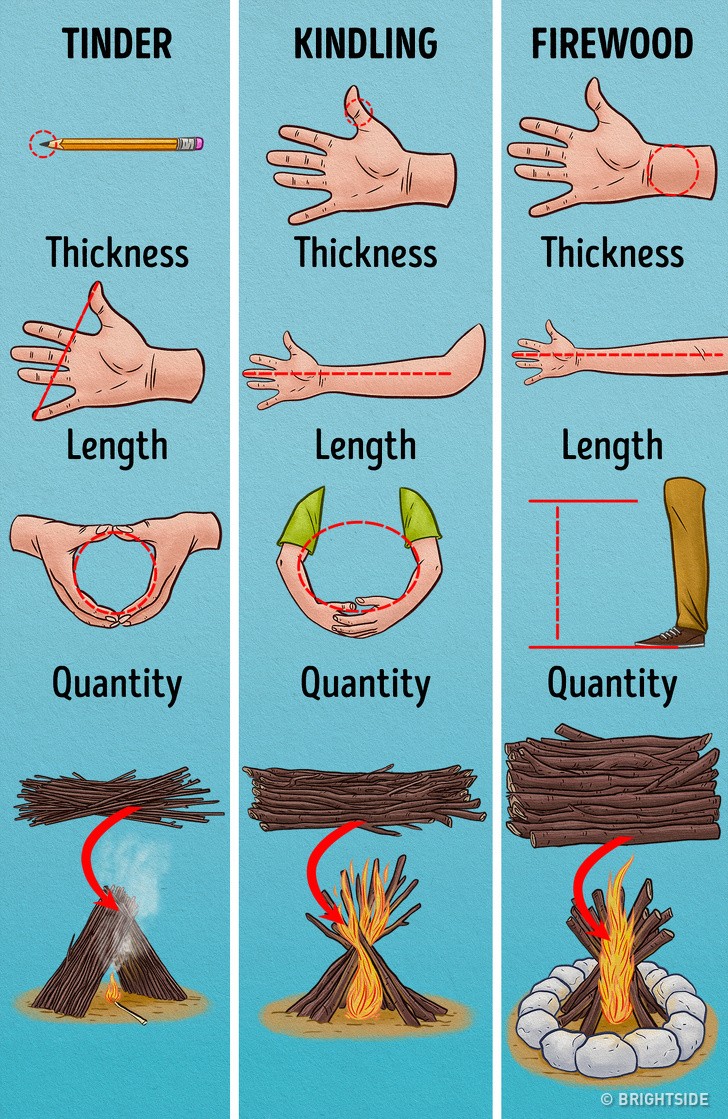 The first thing you need to do in the wild is set up a bonfire. However, not everyone knows how to do it correctly. Therefore, people usually end up wasting their precious time. A bonfire consists of 3 parts:

- Tinder - consists of dry, thin twigs as thick as pencil lead and as long as a hand. You will need as much tinder as you can grasp with your fingers in both hands.

- Kindling - consists of twigs as thick as your fingers and as long as a forearm. You will need as much kindling as you can grasp with both arms.

- Firewood - is a wood that will burn in the fire for a long time. 3 branches should be as thick as your wrist or even thicker. Break them into parts as long as your arms.

Firstly, put the tinder in the shape of a tent and burn it. After that, place the kindling the same way and gradually add firewood. Such a fire will burn for a long time and will give good coal for preparing food. 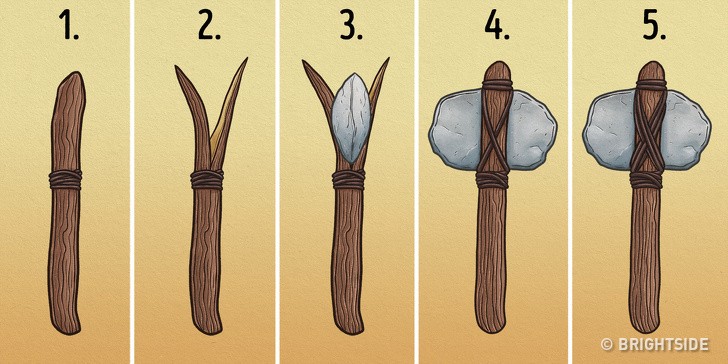 If you don’t have any tools for building a shelter on hand, you can make them yourself. To make a hammer, take a middle-sized, fresh tree branch. Split it into thirds and place a flat but strong stone into the cleft. Afterward, fix it with a rope or a twig both above and below the stone. 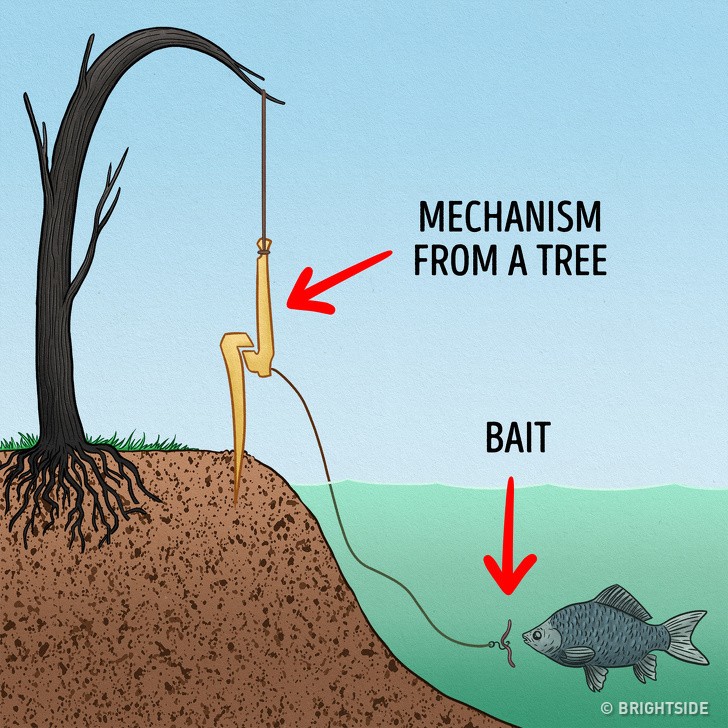 Fish are the most affordable food source in a drastic situation like this, but you’ll need to catch it first. A self-made automatic fishing rod will be of great help.

How to do it: Find a small, young tree near water. Hammer a trap consisting of two wooden wedges and a hook for each other into the ground beside it. Bend the wood and tie up its top to the upper wedge. Tie up a rope with a hook and a bait to the same wedge. When a fish grabs the bait, the trap will work and throw fish out to shore.

4. How to lure worms 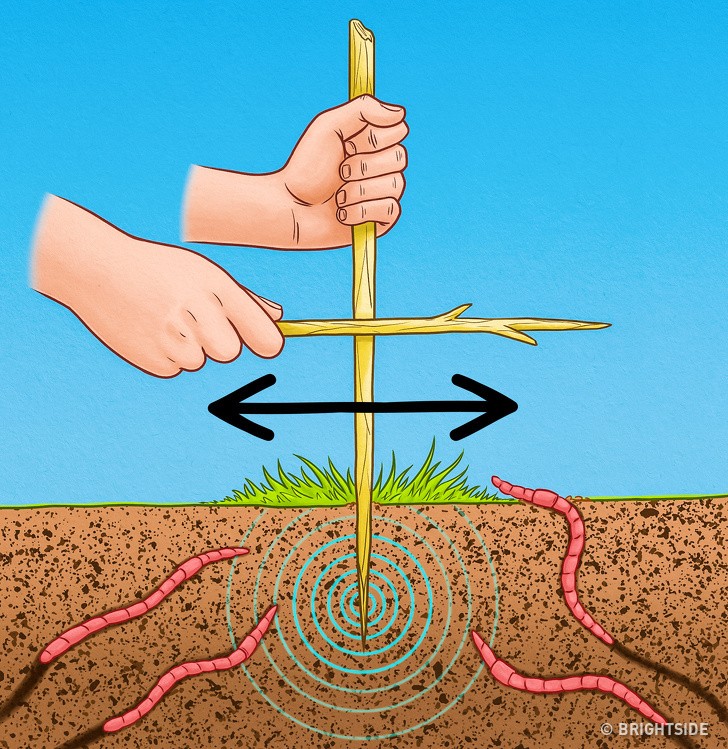 Before catching fish, you should find a bait and for these purposes, there is a trick that fishermen have been using for many years.

Find wet ground and turn a rotten and fallen tree over. Take 2 sticks and hammer one of them to the ground and start to make sawing movements upon it with the second one. 2 or 3 minutes later, earthworms will start to crawl to the surface of the dirt and will be your bait for catching fish.

- Earthworms come outside because they perceive noise as an approach of a mole. It’s the same reason why they crawl to the surface during rain since raindrops cause the same kind of vibrations. 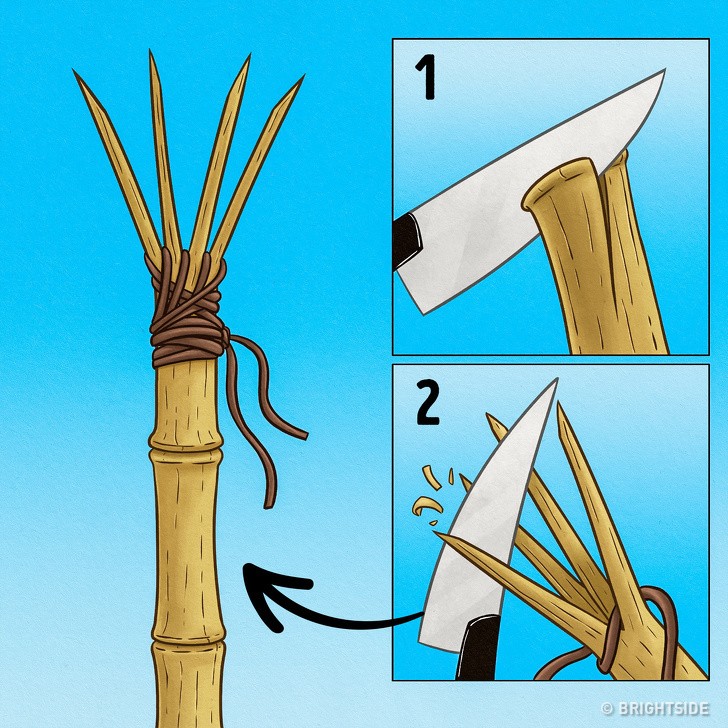 If you don’t have a tool for catching fish, you can make a spear. Find a slightly damp, long and strong stalk. Split its end into 4 parts. Sharpen the spikes of the wood with a knife or a stone and fix it with the help of a rod or rope. Now you can easily catch fish in shallow water.

6. How to properly clean a fish 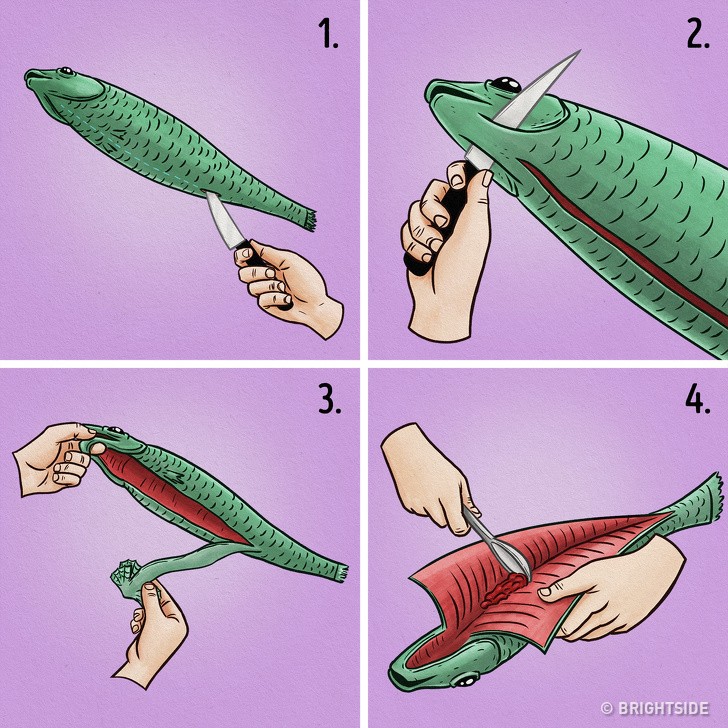 After a fish has been caught, it’s important to clean and undress it. You can do this with several simple movements without much effort or a mess.

- Wash the fish and remove all its fins. After that, insert the tip of the knife into its anus and make a cut towards its head. Don’t insert the knife too deep in order not to damage the insides.

- Having cut up to the upper jaw, split the bony part between the frontal fins. Holding the fish’s jaw, grab its frontal fins and pull them backward. Now all you are left to do is remove the insides, the head with gills, and the tail.

7. How to identify an animal by its pawprints 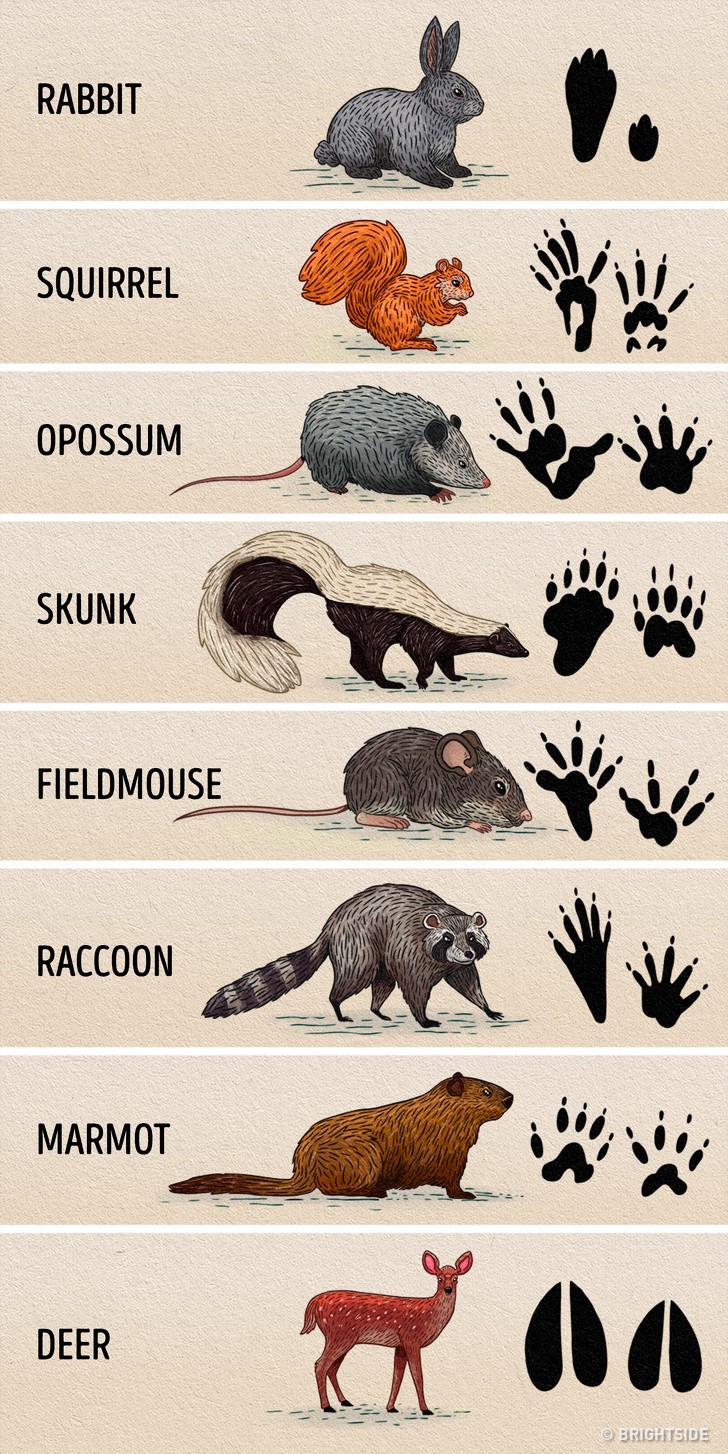 It would be useful to know the footprints of wild animals for hunting or for defending yourself against predators. It’s easy to notice the prints of their paws on wet ground or on crushed grass.

8. What type of fire to make

It can be quite difficult to sustain a fire if you use an incorrect position of firewood. There are several main types of logging and depending on the situation, you should choose the appropriate type of fire.

- Swedish firewood can burn for up to 5 hours and is good for preparing food but it doesn’t light up a terrain well.

- Teepee fires are the quickest to set on fire and provides a lot of warmth and light but it’s not good in windy weather.

- Star fires are good for preparing food and its embers glow for a long time. But if you assemble this type of fire incorrectly, it will be difficult to start.

- Lean-to fires are where one thick piece of firewood supports all the others. This type of fire is good in bad weather, it doesn’t fall apart but it doesn’t burn very intensely.

- Platform fires use firewood placed on each other making up a lattice. It’s perfect for cooking but it requires very dry thick tree branches.

- Log cabin fires burn stably and don’t require any special care. But it requires some skill to assemble the firewood properly so that it doesn’t extinguish the fire. 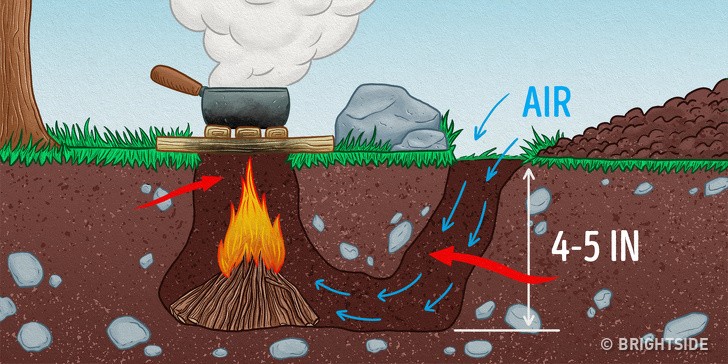 A Dakota hole fire is a hidden underground fire that has been saving people for many centuries. It requires little firewood, is protected from bad weather and provides maximum heat.

All you need to do is dig a pit as deep as 4-5 in and put the firewood into it. Then dig another pit at an angle — it will provide the fire with oxygen. This type of fire should be set near a tree to diffuse smoke. In the end, covering glowing embers will be enough to put out the fire. 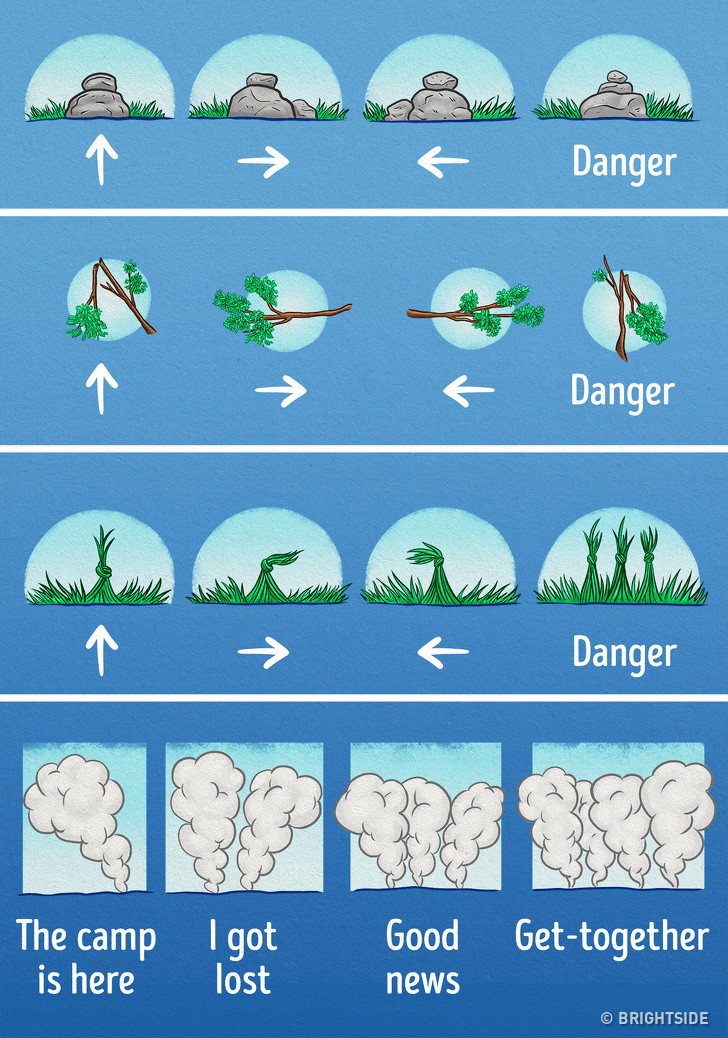 It’s easy to get lost in a wild terrain. That’s why remembering the most common signs can help greatly. They can help you find the way or warn other people about any upcoming danger.

11. How to build a shelter for a night 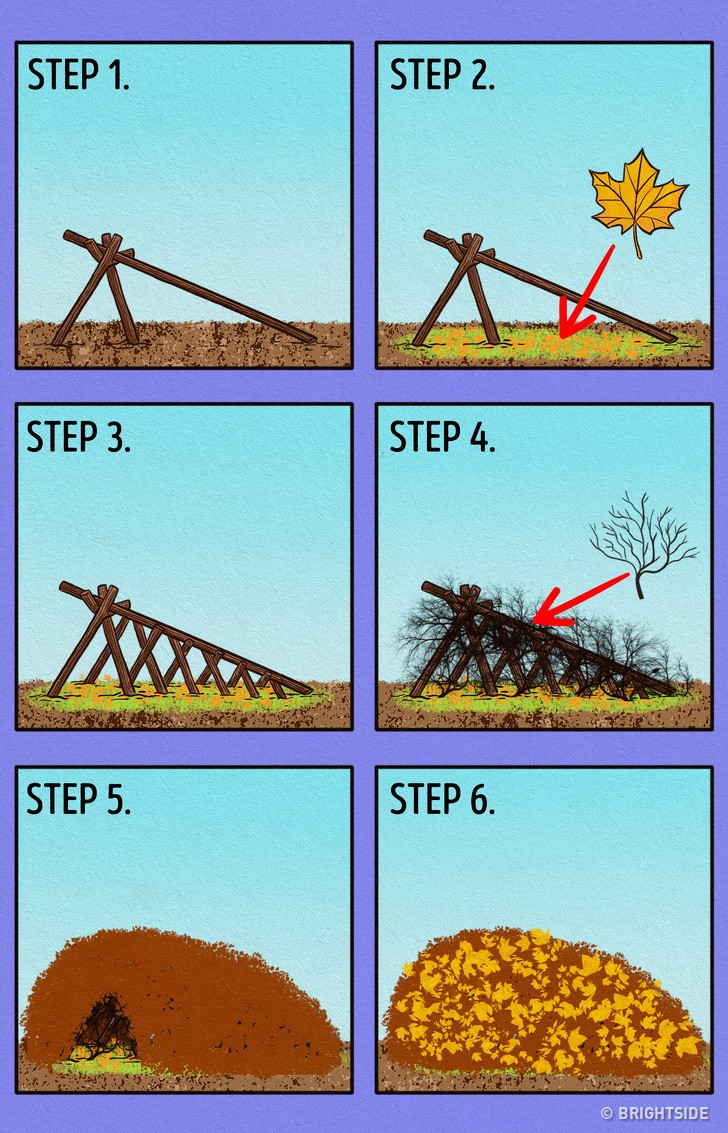 If you have no other choice but to stay in a forest overnight and you don’t have a tent with you, you’ll have to build a shelter yourself.

- Build a carcass using one big tree branch and 2 small Y-shaped ones. Make sure you’ll be able to fit in your future shelter. Cover the ground with a 6-10 inch layer of dry leaves, twigs or grass. It will keep in warmth.

- Place firm sticks on the sides of the carcass after putting several layers of small branches there. Finally, cover it all with a layer of leaves and crush everything with another layer of small twigs. Close the entrance after getting inside. You’ll be able to sleep in this shelter without being afraid of getting cold.

12. How to sew a wound properly

If you get a deep wound, then you’ll have to find a special thread and a curved needle for sewing wounds like the kind you’d find in any standard first-aid kit. But very few of us can actually do this properly. There are many different types of stitches for different wounds but knowing at least one will be enough to give first aid to a wounded person.

13. How to fix a dislocated arm 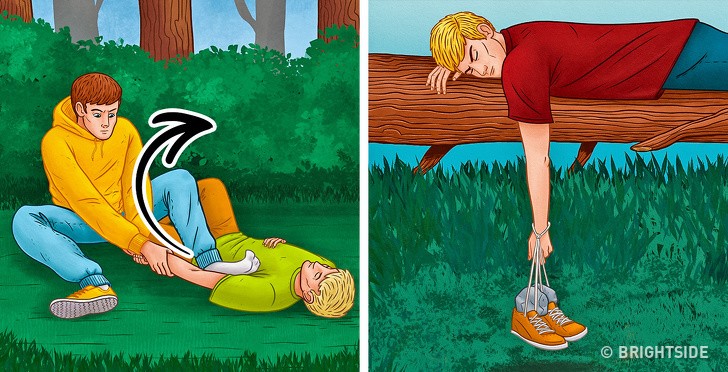 Dislocation is a very common trauma. If you don’t pop the limb into its proper position in time, then a muscle spasm might occur.

For treating another person: Put the injured person on the ground and place your foot (without shoes) in their armpit. Grasp their wrist tightly and start to pull along their body until you hear a click. Don’t do this sharply as it is often shown in movies — by doing so you can harm a person’s nerves, muscles, and tendons.

For yourself: Lie on an elevated surface such as a log. Tie a load to your arm weighing 10-20 pounds. After laying in such a position for 15-20 minutes, the shoulder should get back to its proper position. A fixed limb should be immobilized for at least 5 hours.